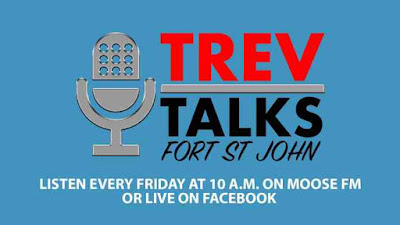 “Imagine a government that is less worried about tickets being scalped and more worried about reducing GHG’s by 20-30% … all while supporting our safe, sustainable and beneficial energy resources?”.  That’s the question posed by Fort St. John Councillor Trevor Bolin.

Just the other day TREV talked with Marlon Lee of FogDog Energy, a company that has redefined the way garbage and recycling are done and helping turn landfills into parks

The big thing about climate change, and having a climate tax, is that landfills in Canada contribute 25 to 30% of all GHG’s in Canada.  The most important things in GHG’s is METHANE – and that’s 20 times more potent than CO2!

The Fogdog Solution is to instead implement a system designed for the treatment of almost any types of waste. It converts Municipal Solid Waste (MSW) and Medical Waste to a composition that is sterile, disinfected and dehydrated. An end product material we call “fluff”. The process also creates both a reduction in volume and in weight.

So why, are we constantly picking on oil and gas?  Everything keeps coming at them.

Instead take 25 tons of garbage … almost all waste including plastics, metals, and organics), and in literally 30 minutes it’s processed down to fluff (like those dust bunnies we find under the couch or bed).

And the end product – the fluff?  It can become energy to power homes and business … and liquid fuels including diesel.

If they (politicians) literally look in their own backyards, and especially in the lower mainland where Vancouver, for example, ships a large part of its garbage north, they would actually be reducing GHG’s faster and more effective than trying to limit resource development.

Instead, Fogdog Energy’s Marlon Lee, says “… they have these energy renewal programs.  I can tell you this, what programs?”

“The parameters they put in place doesn’t work for most organizations that are actually trying to have something, and trying to make change … the programs don’t apply to them!”

It might seem a little harsh, however Marlon says, “When it comes to government – NDP / Liberal – it doesn’t matter.  They have been completely useless.”

And that’s likely why Trev stated that, “The people of BC and Alberta have to reach out to government and have them look into it (this process), and STOP beating up on the oil and gas sector!”

It’s been proven in other countries, especially in Europe.  If politicians won’t accept the concept, it’s time to make a change.

Change has to be made … let’s do this!

FOR MORE INFORMATION on the process and concept, CLICK HERE

Ft. St. John Councillor Trevor Bolin was born and raised in Fort St. John and has been following his dream of serving his community as a Fort St. John City Councillor since 2008.
Trevor is co-owner of RE/MAX Action Realty, owner of Burger King FSJ, owner of Gateway Esso and developer for The Gateway Plaza.
Trevor has volunteered over the years for many local and provincial not-for-profit groups and boards. Trevor is married to Lori and they have two sons.