FELDSTED: We could easily calculate a flat tax rate, that would produce tax revenue equal to those currently produced

The nice thing about an election year that's accompanied by federal budget surpluses is that it's fertile ground for tax cuts ... but who should really benefit from tax cuts? While it might not seem politically correct to suggest that the rich should get the lion's share of tax breaks, let me share a story that I first shared many years ago that provides food for thought here.

Each and every day, 10 men go to a restaurant for dinner together. The bill for all 10 comes to $100 each day. If the bill were paid the way we pay our taxes, the first four would pay nothing; the fifth would pay $1; the sixth would pay $3; the seventh $7; the eighth $12; the ninth $18. The 10th man – the richest – would pay $59. Although the 10 men didn't share the bill equally, they all seemed content enough with the arrangement – until the restaurant owner threw them a curve... he reduced the bill ...

The nine outraged men surrounded the 10th and brutally assaulted him. The next day, he didn't show up for dinner, so the nine sat down and ate without him. But when it came time to pay the bill, they faced a problem that they hadn't faced before. They were $50 short. 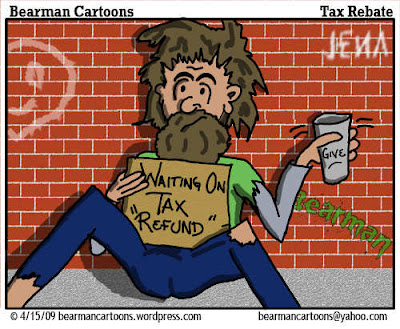 ... the right approach to divvying up tax cuts. It's how our system should work. The people who pay the highest taxes should get the greatest relief from a tax cut, in absolute dollars.

The fact is, if you overtax the rich, they just might not show up for dinner next time. After all, there are plenty of good restaurants around the world.

CLICK HERE and be sure to read the full story:

Mr. Cestnick neatly points out that people who are accustomed to tax penalties, at a given rate, have no interest in tax cuts that reflect the penalty rates.

This is why government schemes to adjust taxes for the poor -- or middle class -- or the rich are full of unintended consequences and resentments. Progressive tax schemes are inherently unfair and effectively punish industry and productivity.

We have the numbers to calculate total incomes, and we could easily calculate a flat tax rate that would produce tax revenue equal to those currently produced.

We could then do away with most of the complex calculations required to establish a taxable income, along with the tax measures that refund some taxes that should not have been collected in the first place.

Incomes below the established poverty line should not be subject to income tax.

Taxing people who are in low income brackets transfers support to social service agencies, food banks and charities. That complicates problems rather than solving them.

It makes no sense to tax an employee’s pay cheque every month and then reimburse him, for what was taken with a tax refund a few months later. Reducing or eliminating the tax burden would have allowed that person to enjoy a slightly better lifestyle throughout the year.