“Some members of the street-entrenched population” are causing problems. Some of the problem people are homeless, some are addicts, some are mentally ill ... but no one category defines the problem at hand


Every community suffers from these things.  Problems resulting from homelessness ... overuse, excessive use, and addiction to drugs and ... spray-painted scrawling doodles, that most do not find artistic, and which have to be cleaned up ... panhandlers and street-people.

Last Summer, the City of Penticton decided it was time to take action because, as Chief Administrative Officer (CAO) Peter Weeber stated:

“A very small amount of people are causing a tremendous amount of problems in our community.”

In a July 2018 media release, the city pulled no punches making it clear that enough was enough:

The City of Penticton is taking a zero-tolerance approach to all unacceptable behaviors and illegal activities.

The communication went on to say, “It is time to take our community back from a small group of people that cause a high percentage of the problems. We encourage residents and visitors to report any activity that threatens the safety and beauty of our home”.

Over the weekend I asked Mr. Weeber about managing, solving, and finding a balance to problems that were occurring in Penticton, and he said to me ... “The issues we are experiencing can only be managed not solved.  Successful management of the issues require collaboration and balance.”

Meantime an hour and a half north, in the City of Vernon, a February 13th editorial in the Morning Star stated: “The impact of the street-entrenched population on downtown business can’t be tackled without also tackling or at least mitigating the overarching issue of homelessness."

He continued:  “The problem is, as I made a careful point of saying twice, that "some members of the street-entrenched population" are causing problems. Some of the problem people are homeless, some are addicts, some are mentally ill.  But no one category defines the problem at hand”.

With that, Anderson circled back to how Penticton in particular is dealing with the issue:

"Solving" homelessness will not solve the problem, nor is it impossible to alleviate the problem without solving homelessness. What we need to do is make it apparent to the trouble-makers than Vernon is no longer a free for all, and we can do that the same way Penticton did - through enforcement and a zero-tolerance attitude.”

That took me back to Chief Administrative Officer Peter Weeber in Penticton, and the obvious question of whether they were still facing issues, and how they were being dealt with.

“We will maintain a hard stance on managing inappropriate behaviours in the community”, he commented to me.  And then quickly followed up stating ... “There must to be a balance in our approach and there are no quick solutions to the challenges we are experiencing in Penticton”.

And like Penticton, there are no quick solutions in Vernon either.

Again, quoting Councillor Anderson, “We may not be able to solve the problem completely, but we can make it very very difficult for people to remain troublemakers in Vernon”. 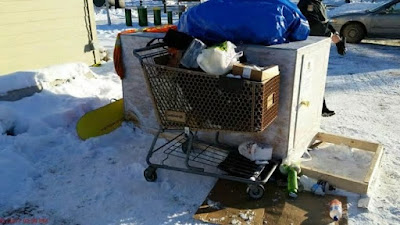 Striking the right balance between implementing possible solutions quickly, and what can and should be done over time, isn’t an easy task.  Nor does figuring out the partnerships, and pieces of the puzzle, that will come together to help create solutions to complicated problems.  According to CAO Peter Weeber:

“BC Housing, Interior Health and the non-profits are one dimension supported by the city in a variety of ways. (Meantime) The City deals with inappropriate behaviour through bylaw enforcement and our contractor the RCMP.”

As it stated at the beginning of this piece:

“Every community suffers from these things.  Problems resulting from homelessness ... overuse, excessive use, and addiction to drugs and ... spray-painted scrawling doodles, that most do not find artistic, and which have to be cleaned up ... panhandlers and street-people.”

Remember though, it’s not just in Vernon and Penticton.  It’s Kamloops ... it’s cities in metro Vancouver ... Victoria ... Vancouver Island ... and the North.

There is no one single ‘one size fits all’ solution, but there are ideas which can be brought forward, and discussed, in every community across the province.  They can be implemented and tweaked, and then perhaps shared with other regional communities, and perhaps through the Union of BC Municipalities (UBCM).

Again, there won’t be a one size fits all solution, but ideas will grow and multiply if we only take the time to look for them.

In Kamloops, I’m Alan Forseth, and now I am very much interested in hearing what your thoughts are on this topic.  Please take a moment to write them down in the Comments Section directly below this blog post.