One day after naming former Liberal MP, Leona Alleslev (crossed over to the Conservatives September 2018) to the role of Deputy Leader, Andrew Scheer today named his Shadow Cabinet.

From the BC interior, and my home riding of Kamloops – Thompson – Cariboo MP Cathy McLeod has been named as the Conservative Party’s Shadow Minister for Natural Resources (Forestry and Mining).

“I am stepping into this role as the crisis in the softwood lumber industry continues to unfold,” MP McLeod said. “At least 20 mills have been forced to shut down or curtail production.  As a result, more than 4,000 people across 27 communities in B.C. are at this moment, out of work.  This does not include the thousands of contractors and small businesses that have been affected indirectly.”

“The challenges facing this industry are vast and complicated. The amount of trees available for logging plummeted in the wake of the pine-beetle infestation, which is now heading east through Alberta and Saskatchewan. Locally here in the interior of BC, and northern Ontario as well, have faced devasting forest fires,” MP McLeod said.

“Mining is another key component of this portfolio. The sector represents 3.6% of Canada’s total GDP, and employs over 634,000 people,” McLeod said. “This includes an increasing number of Indigenous people. In 2016, 12% of the mining workforce was Indigenous, up from 8% in 2011.”

Meantime due south in the riding of Central Okanagan, Similkameen, Nicola ... MP Dan Albas was appointed the Shadow Minister for Employment, Workforce Development and Disability Inclusion.
On hearing the news, Albas stated, “Having a job is more than just a paycheque, it provides meaning, a place in the world. Building a skilled workforce is essential for ensuring that Canadians can realize their dreams for themselves and their families. This includes the many persons with a disability who for too long have been unable to participate fully in our economy and our society”.

He then went on to say, “I will work tirelessly to hold the government to account and make sure that Canadians can get ahead and that those in our struggling energy and forestry sectors can get back to work.

And south-east in the riding of North Okanagan Shuswap, re-elected MP Mel Arnold will now, in what some (many?) may be questioning, be the shadow minister for Fisheries, Oceans and the Canadian Coast Guard.

“I am grateful for the opportunity to serve in the Official Opposition’s Shadow Cabinet on behalf of Canadians from coast-to-coast-to coast who deserve a strong voice in Ottawa”, said Arnold.

“I look forward to building on my experiences gained by working on fisheries and Coast Guard issues in the last Parliament communities and all Canadians who depend on the Department of Fisheries and Oceans and the Canadian Coast Guard and fight for the policies and resources required to conserve and protect our precious resources.”

Meantime, in the riding of Cariboo-Prince George, Todd Doherty was appointed Shadow Minister of Transport ... while Bob Zimmer – the MP representing Prince George-Peace River-Northern Rockies MP Bob Zimmer – was announced by Scheer to the take on the Northern Affairs and the Northern Economic Development Agency portfolio. 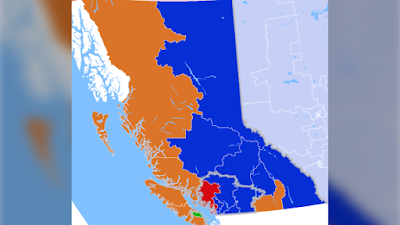 The following is a list of all BC MP’s named to the Scheer’s shadow cabinet today: