FELDSTED: Common sense and reason have been successfully eradicated from our academia and political institutions, but live on in the hearts and minds of ordinary people


The Death of Common Sense
March 15, 1998 ~~ by Lori Borgman ~~ First published in the Indianapolis Star

Three yards of black fabric enshroud my computer terminal. I am mourning the passing of an old friend by the name of Common Sense. His obituary reads as follows: 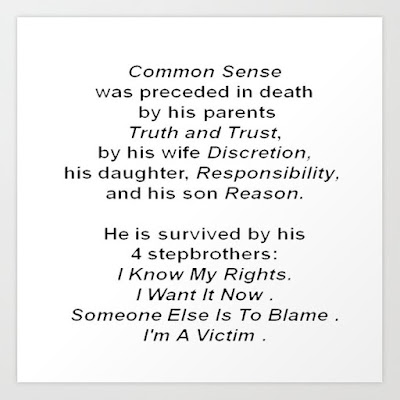 Common Sense, aka C.S., lived a long life, but died from heart failure at the brink of the millennium. No one really knows how old he was, his birth records were long ago entangled in miles and miles of bureaucratic red tape. Known affectionately to close friends as Horse Sense and Sound Thinking, he selflessly devoted himself to a life of service in homes, schools, hospitals and offices, helping folks get jobs done without a lot of fanfare, whooping and hollering.

Rules and regulations and petty, frivolous lawsuits held no power over C.S. A most reliable sage, he was credited with cultivating the ability to know when to come in out of the rain, the discovery that the early bird gets the worm and how to take the bitter with the sweet.

C.S. also developed sound financial policies (don’t spend more than you earn), reliable parenting strategies (the adult is in charge, not the kid) and prudent dietary plans (offset eggs and bacon with a little fiber and orange juice) .....

I believe Ms. Borgman’s obituary to be premature.  Why?

Because while common sense and reason have been successfully eradicated from our academia and political institutions, it still lives on in the hearts and minds of ordinary people. However ... the efforts to stifle common sense, and reason, continue through political correctness, and more recently by the group-think engendered by social media.

Just like back in high school, people with little self esteem (and confidence and ambivalence respecting principles and responsibility) join groups to avoid having to make necessary and obvious choices. The result is groups that are easily manipulated; they end up following group leaders no matter how inane.

The health of our nation and society is still dependent on independent thinkers, who seek practical solutions, rather than talking endlessly about problems. Sadly however, it is evident that the people we elect to represent us, have abandoned principles and common sense, in return for power and prestige.

Given that, it is small wonder our governments are in a mess, and unable to map a way forward.