We’re not the ones comfortably sitting at some coffee bar sucking a latte, while consciously or unconsciously enjoying the rewards provided by the very resource workers they hope to shut down.”


Prime Minister Justin Trudeau is scheduled to attend a $300.00 a plate Kamloops luncheon at the Coast Kamloops Hotel this Wednesday.  While there, local resource workers will simultaneously be holding a brown bag lunch outside. 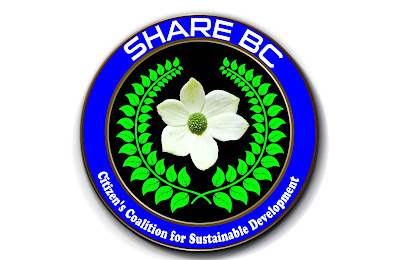 “Most resource workers cannot afford $300.00 to access our Prime Minister, so we’ve invited him to join us for a brown bag lunch”, stated Giesbrecht. “We’d really like an opportunity to talk about public policy that supports our resource communities”.

Resource workers, as well as anyone who makes a living either directly or indirectly from the resource industry, are asking the Prime Minister to reconsider some of the more onerous aspects of proposed Bills C48 and C69, both known as anti-resource development Bills.

Again, quoting local Share BC Director Dennis Giesbrecht, “We’re not just talking about oil and gas workers, we’re also talking about those who make their living from forestry, ranching, mining and aquaculture”.

“The thing that gets lost in all of the protests and blockades taking place, is that many of the people wearing hardhats and work boots and gloves, are actually the very ones who spend their lives, both working and in leisure, out in British Columbians forests, rivers, lakes, and wildlands.”

Giesbrecht continued, “We’re the ones who are actually connected to the environment.  We’re not the ones comfortably sitting at some coffee bar sucking a latte, while consciously or unconsciously enjoying the rewards provided by the very resource workers they hope to shut down.”

In speaking with Giesbrecht, it appears many of the foreign-funded activists and protesters, are the same ones from the 1980s – back again to fight not only the oil and gas industry, but mining and forestry and more.

“If they succeed in shutting down the Canadian energy sector, they’ll just go after the next industry; they won’t go away”, continued Giesbrecht.

When asked about why he was involved in Share BC, Giesbrecht, who has worked for over twenty years as an industrial inspector, including at Weyerhaeuser (now Domtar) in Kamloops, stated, “If we end up importing resources from countries, with little to no environmental standards, that will undoubtedly lead to a huge negative impact on the environment”.

“We can’t let this be the end result of uniformed career activists shutting down one of the cleanest, and most regulated resource industries in the world”.

The Chair of ShareBC, Chris O’Connor would like to see some balance come out of Ottawa as well.

“As resource citizens we promote and encourage all people to work toward a strong economic base in our rural resource communities ... while maintaining the principles of multiple use of our land base.”

The policy decisions being made on Canadian resource industries are too one sided.”

Reinvigorated and revived once again after fighting protesters in the 1980’s, it seems SHARE BC is fully prepared in their fight to add balance to the Canadian dialogue on resource development ... and according to local spokesperson Dennis Giesbrecht, the brown bag lunch is the first action,in the Kamloops, Thompson / Nicole region, to bring attention to resource workers’ need. 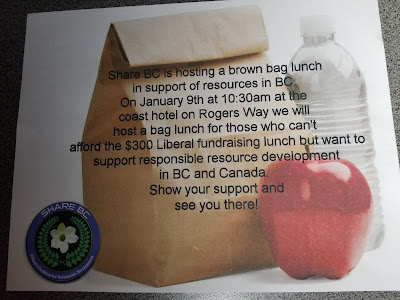 “We’ve phoned the Prime Minister’s office and invited him to our brown bag lunch” stated Giesbrecht. “We have one here with his name on it”.

“Our message will be clear to those trying to tear down the resource industry, we support resource stakeholders.”

Asked how many he hopes to see on Wednesday’s Brown Bag lunch at the Coast Kamloops Hotel Giesbrecht commented ... “If this was Alberta on a weekend, we’d have one to two thousand people.  Being a workday, and with many who are in the resource industry working at their jobs, it’s hard top say.”

He concluded, “That said ... however many are there, they will continue to be the people who truly believe in sustainable resource development”.