FELDSTED: Political parties don’t stand for anything except winning power. We deserve better, but things only get better if we work at it


Every four years, we elect 338 Members of Parliament. All of them are humans with the frailty’s which all humans share. We say dumb things, make mistakes, apologize, pick ourselves up, learn from our errors, and get on with life a bit wiser.

Applying this to Karen Wang and the comments attributed to her, and then seeing her disallowed from running because a comment might negatively reflect on the federal Liberal party, is an affront to democracy.

Our political system has been turned upside down. If elected, Ms Wang’s job would have been to represent the people of Burnaby South to the best of her ability -- not to defend or protect the image or decisions of a political party.

MPs have been turfed from a party for failing to toe the party line – are we okay with that?  Political parties telling our representative how they must behave, what they can and cannot say, and how they will vote on public issues should not be acceptable to Canadians.

Since when did party disciple trump an elected MP from representing the people?  Some MPs have changed party allegiance, because they had strong opposing feelings on an issue, and could not find support in their current party.  How is this looked at within the political system?  Senior party officials have a fit when MPs jump ship.  However, we should be revolted by that!  Our elected officials are not in parliament to serve any political party.

The strategists hired by a party leader’s office, together with unelected party officials, are running the country – and they are in an all-out war with one another. They are focused on positioning their party to keep or regain political power.

Influencing the vote is paramount; the only thing that counts.
They will say or promise anything to get your vote.
They have no intention of delivering on their promises.
Representing the people, and acting in their best interests,
are not even on the agenda. 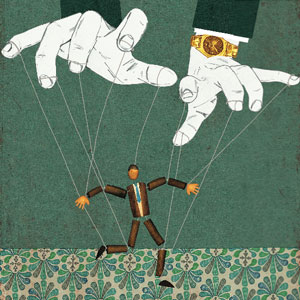 We can change that by ignoring the millions spent on political advertising, and electing candidates committed to represent us. Political parties don’t stand for anything except winning power. We deserve better, but things only get better if we work at it.

We don’t have to accept excuses for failing to act in our best interests. We don’t have to allow political parties to set the agenda for dialogue. We can demand answers and rally to support important causes.

Collectively, we need to make party officials, and leaders, squirm in their chairs and lose a lot of sleep until they return to democratic governance on behalf of us all.

The days of political party rule are over, or at the least, should be!
John Feldsted
Political Consultant & Strategist
Winnipeg, Manitoba