MacLEOD: Even if there is some risk to vaccinations (very very small for most), that, of itself, is the wrong question. More importantly, one has to also look at relative risk


The other day I posed a comment on my Facebook page linking to a Newsweek article which stated, “Anti-vax Movement Listed by World Health Organization as One of the Top 10 Health Threats for 2019”.   (CLICK HERE for the full story) 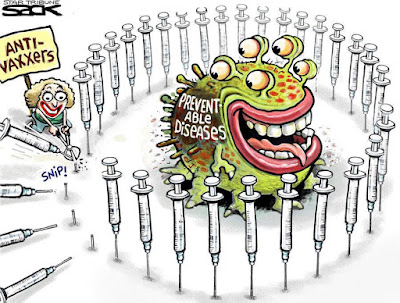 That prompted a response from Ian MacLeod, which he has given me permission to use on the blog-site; a commentary which he indicated has been used previously, and one which he will continue to post in places where the public will be able to read it.  Here is what he had to say:

Subject to the second to last paragraph, I think that the parents who intentionally expose their children to disease, should be treated the same way as child beaters, and charged. Those children should not be allowed in the schools.

Likewise, I hope some enterprising lawyer launches a law suit against parents who have refused vaccination for their children, and those children have gotten sick, spreading disease to those with ineffective vaccinations.

Their children, and in turn mine and everyone else's, should not be willingly exposed to preventable harm.

Even if there is some risk to vaccinations (very, very small, for most), that, of itself, is the wrong question; more importantly, one has to also look at relative risk. If the risk of serious side effects is one in a million (say) from a vaccine, but one in 100,000 (say) of getting a debilitating illness if unvaccinated, both the odds of harm, and its magnitude, to the unvaccinated are very much higher by not getting vaccinated.

Compounding that is the grossly irresponsible risk being imposed on everyone else in the community.

I understand that, for informed medical reasons, some children may not be able to be vaccinated, and that is fair enough. However, for vaccination programs to be effective, a substantial majority (apparently, about 95%) of people should be vaccinated - otherwise, everyone else is exposed to higher risk. Likewise, vaccinations are not 100% protection, but close to it, so a very few may still get sick anyway.

But if non-doctors and non-research scientists who have only modest medical education, decide that they know more that the overwhelming majority of medical professionals, and in turn decide to expose their children to polio or any other number of debilitating diseases, I have a very serious problem with that, and with their capacity to be responsible parents.

Their children, and in turn mine and everyone else's, should not be willingly exposed to preventable harm.

Am I too subtle?
Ian C. MacLeod

He has been very involved in the volunteer leadership of over 40 organizations, heading 14 of them - including the BC Chamber of Commerce (1992-1993), the Clan MacLeod Societies of Canada (2004-2008) and the Richmond Aquatics Advisory Board (2008--2018). He has written widely on public policy issues.

He has received several awards, including the Queen’s Golden Jubilee Medal (2002).