FELDSTED: Tossing the core principles religious teachings, such as the commandments and deadly sins, in the trash bin was unwise

(On Jan 19th, 2019) a Colorado man named Christopher Cleary took to social media and laid out the plan for an attack that was coming together in his mind ... police tracked him down – en route to a women's march in Utah — before he was able to carry out his plan. 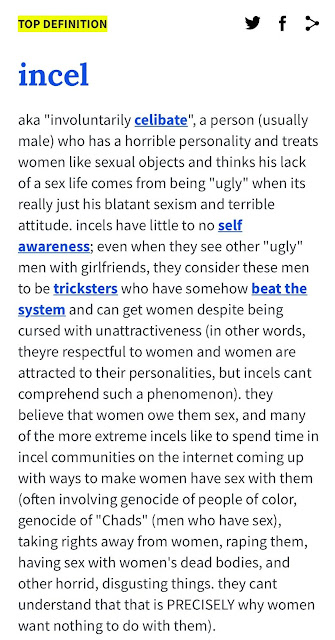 But it doesn't always work out that way when men who identify themselves as incels ... incels are an online brotherhood of men who say they are unsuccessful in their romantic attempts with women.

A recent count by The Fifth Estate shows at least 60,000 people are active in the three main public incel forums online.

The Fifth Estate has nosedived into tabloid sensationalism.

The principle architects of our brave new world, primarily college and university professors, are distraught at the results of their experiments and screaming for protection.

Unfortunately however, the victims of incel revenge will be innocents. We are the reaping undesirable results.

Tossing the core principles religious teachings, such as the commandments and deadly sins, in the trash bin was unwise – teachings whose principles are not exclusively Judeo / Christian. They appear in several different religions without fundamental differences. Sex education for prepubescent school students is unwise. It creates expectations that children are emotionally and mentally unequipped to handle.

We stopped teaching the fundamentals of compassion, decorum, ethics, etiquette, honesty, honour and personal responsibility ... and now wonder why we have a more brutish and uncaring society.

The lack of underlying personal principles is responsible for the domestic violence in our society.

Our focus on popularity, as the key to happiness and success, is inane. The result is that people who don’t achieve popularity feel abused and resentful. From there it is not a complex journey from resentment -- to rage -- to revenge.

The Fifth Estate / CBC article provides no insights into why some people are shut out of the mainstream.

They are victims of social standards and values they don’t understand; the key is education. We have a growing disconnect between what our education system is producing and real-world consequences. Incels is only one tiny aspect. Counting up 60,000 participants on incel web sites sounds ominous until you find out that is less then one-fifth of one percent of the males in North America.

Not one contributor to this piece attempts to tackle the issue of how we can bridge the gap and bring incels into the mainstream, or how we can adjust social standards to prevent the creation and isolation of people in the future. Instead, they label incels as ‘right-wing’ or ‘extremists’ as if the issue is political - or that the labeling absolves them of responsibility.

The architects of our brave new society created a problem and are now trying to avoid responsibility, by presenting it as a new problem to solve.

It is not new, and it is their responsibility.