KAMLOOPS: An invitation to join resource workers to a Brown Bag Lunch was extended to Prime Minister Justin Trudeau – it was declined 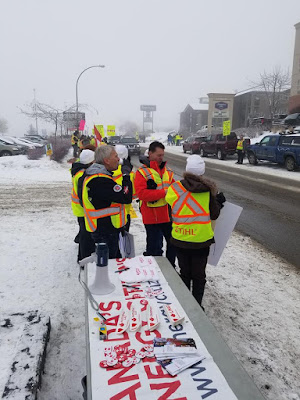 According to local Kamloops ShareBC representative, Dennis Giesbrecht, there were well over 100 pro-resource supporters at the Coast Canadian Inn this morning.  Them came out during a snowy day in Kamloops, to greet Liberal Prime Minister Justin Trudeau.

In one of the photo’s you can see people signing a banner asking Trudeau to get the pipelines built.  In same photo (bottom right corner), you can see the brown bag lunch they had ready for Justin should he have joined them.

Dennis Giesbrecht informed me that an invitation to meet with local resource workers, and enjoy the working mans and woman’s brown paper bag lunch, was extended through the Prime Ministers office -- there was no response to it.  Meantime, the white collar federal Liberal supporters, who could afford a $300 lunch so as to hob-nob with the Prime, did get to spend time with Trudeau. 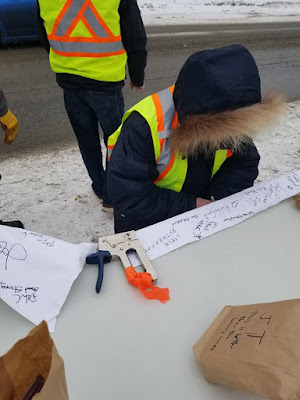 Hmmmm … I’m pretty sure I recall something from Trudeau saying he understands the plight of the middle class.  Coming out and spending some time with brown bag lunch resource workers, might actually have allowed him to find out first hand, the current plight they face with job loses, and every increasing taxes.

I’m Alan Forseth in Kamloops.  If you have any thoughts on this commentary, I welcome you to share them below in the Comments Section.