BC Conservatives are a day away (Saturday) from their Annual General Meeting, in Abbotsford, and according to Party officials, excitement is growing about the possibilities, and future, for a party that was once a strong force in the province. 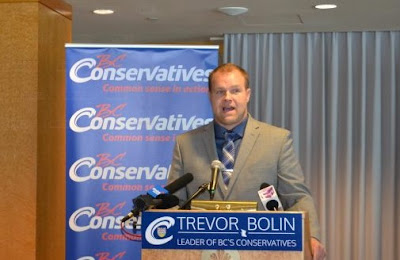 “One of the reasons for our growing appeal over the past several months”, related Conservative Party leader Trevor Bolin, “Is that people are realizing the need for a common sense choice, or option; and people need that choice, now more than ever”.

At the AGM, according to Bolin, the membership will continue on the road to forming policies, and a platform, that will benefit families, create jobs, reduce the cost of living and set BC on a course that we can be proud of for generations.

“We have seen the long term effects the BC Liberals have caused in initiating a Carbon Tax which hurt B C families, and did little to benefit the environment”, Bolin remarked.

“We have seen the continuation of high sky rates from ICBC, money laundering claims relating to sky high real estate prices in some areas of the province, and the list does on”.

“However, I would be remiss”, he continued, “if we did not talk about the NDP’s brief, yet extremely negative effects of increased taxes, blocking resource projects, and sitting by idly as a once proud forest industry declines into in shambles”.

“All of these issues are the direct result of a government, led by Premier John Horgan, that has been negligent in its disregard to engaging with, or listening to, British Columbians”.

The party is encouraging all members to attend the Annual General Meeting, which gets underway tomorrow in Abbotsford at 9am; being held at The Rancho on Delair Road.

“We need the involvement not just of members, but of all British Columbians, to help in creating a party that will shape the future of BC using common sense”.