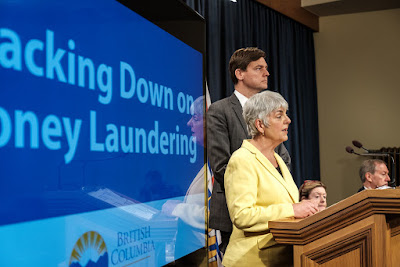 In a July 26th, 2018 article in the Georgia Strait, Finance Minister Carole James indicated the provincial government would be ending the corporate secrecy around who owns land in BC – this, permitted under Section 49 of the Business Corporations Act.

The law as it stood laid out strict legal requirements under which shareholder lists could be obtained from companies ... and it prevented the media from visiting a corporate registered records office to find out who owns a company.

The government stated it was “taking action to end hidden ownership” in order to crack down on tax fraud and close loopholes. It also stated that due to many parts of the Act involve taxation matters, the Ministry of Finance would be directing the process.

According to North Vancouver - Lonsdale NDP MLA Bowinn Ma the legislation was to be introduced by that Fall. Well it actually took longer however -- April 2nd of the following year in fact – before the NDP government of Premier John Horgan did introduce changes to the Business Corporation Act, to keep ‘transparency registers’.

A month and a half later (May 16th) the Landowner Transparency Act (Bill 23) received royal assent. The actual amendments, however, will not take place until May 1st – twenty-one months after NDP MLA Bowinn Ma was quoted saying “Hidden real estate ownership in BC is soon coming to an end”.

Regardless of what to some might consider to be a long delay, according to the Expert Panel on Money Laundering in Real Estate ... the disclosure of beneficial ownership is the “single most important measure” that can be taken to combat money laundering.

When asked, the Ministry of Finance indicated to me that, “Both the land owner transparency registry and the BC private business ownership registry were recommended as actions by the Expert Panel on Money Laundering in BC Real Estate, and these changes would establish BC as a national leader on actions to battle money laundering”.

I was also told that, “The recommendations in the Expert Panel report represent fundamental shifts in how government can bring in systemic changes to eliminate illegal money that hurts BC communities”.

After receiving the report, which runs nearly 200 pages, and recommendations from the panel of professionals, I wondered why the government is now seeking input (to be submitted by mid-March) from the public?

I also wondered how, and to what degree, will this information be used?

According to the Ministry of Finance ... these consultations may result in policy changes that affect a broad range of businesses, professions and sectors – each with their own needs and challenges.

“It’s important that we hear from them directly to hear what their concerns are, what support they need and how we can work together to end money laundering in our economy”, I was told.

So, with the additional consultations, now with the public, underway … I wondered what is the hoped-for outcome? I also wondered why the Land Owner Transparency Registry (LOTR), is a separate entity from the business registry?

In response, I was told that … while there is some overlap between the two, they target different entities. 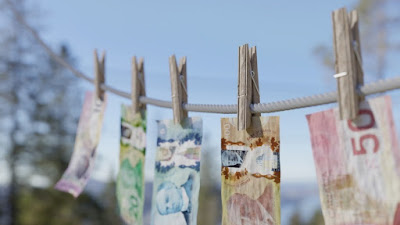 The LOTR is targeting anonymous owners of BC real estate (whether through a trust, a corporation or partnership). Meantime ... the company registry is focused on all private BC companies incorporated under the Business Corporations Act ... it’s a registry which is not associated with land.

“Money laundering in our economy must end,” said James. “These consultations are an opportunity for the public to voice concerns around how we can prevent dirty money from coming into our communities through these channels and create a better, safer British Columbia”.

She then continued, “I encourage the public, and BC businesses, to provide their valuable input by March 13, 2020”.

Hopefully the feedback will indeed provide valuable insights for the government to consider, as they review existing legislation to combat and reduce money laundering.

To provide feedback to the Policy and Legislation Division by electronic mail at BCABO@gov.bc.ca.  Please note that it is recommended that prior to doing that, you review the consultation document.