I want to be crystal clear. Albertans are proud people. We have never viewed our relationship with the federal government as one based on charity, and we’re not about to start now

“Teck is not a political gift – it deserves to be approved on its merits. If the federal government takes seriously its commitment to science-driven, evidence-based decision-making, then it will accept the recommendation of the regulatory agencies and approve it. In our view, the federal cabinet’s pending decision on the independent joint review panel’s recommendation to approve Teck Frontier is in no way linked to Alberta’s ask regarding an equalization rebate (or other unrelated requests).

“The project has undergone a rigorous 10-year review, including a recommendation for approval from the independent federal regulator. Teck has played by the rules endorsed by Ottawa – including by the current federal government. To arbitrarily reject the project at the eleventh hour for political reasons would send a chilling signal to international investors.

“The Frontier project will directly employ up to 7,000 workers during construction and up to 2,500 workers during operation. An estimated $70 billion in taxes will be collected over the life of the mine, along with billions of dollars of economic activity that will ultimately spread throughout all of Alberta and Canada. 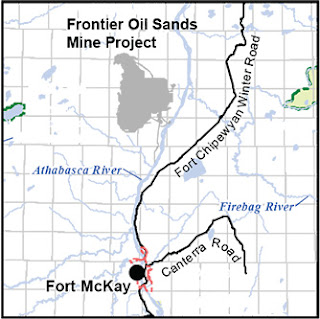 I want to be crystal clear. Albertans are proud people. We have never viewed our relationship with the federal government as one based on charity, and we’re not about to start now ~~ Jason Nixon

“All of the 14 directly affected First Nations have reached agreements with the company, and Frontier will provide large numbers of jobs for Indigenous Canadians. They recognize that responsible resource development can serve as a path to prosperity.

“Teck has committed to leading environmental standards for emissions, water and reclamation. The Teck Frontier project will have emissions of approximately one-half of the oilsands industry average, and lower carbon intensity than half of the oil currently refined in the United States. The company has also recently committed to going net zero by 2050.

“We do not view a decision on Frontier as something to be traded away or politicized. For us this issue goes beyond politics – Albertans want approval plain and simple.

“Prime Minister Trudeau has emphasized his desire to work with Alberta and to preserve national unity. It’s time he backed up his words with action.