Selina Robinson and BC NDP have wasted valuable time coming up with an alternative that gives less flexibility to local governments, and is simply less effective, says BC Liberal Housing Critic Todd Stone


VICTORIA (February 24, 2020) – The NDP introduced legislation today that claims to provide property tax relief to businesses, however, the proposed solution is not what small businesses, local governments and many other stakeholders were asking for, which was ending the tax on unused airspace. 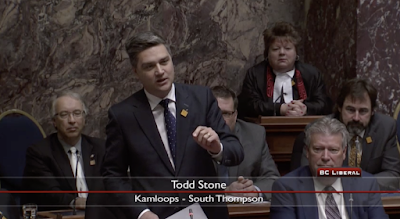 “A broad coalition of stakeholders — including small businesses, chambers of commerce, boards of trade, and non-profits — have been collaborating for years on a solution to rising property taxes. What they all agreed on was the need for the province to allow for split-assessment, which is provided for in the bill that I introduced in the Legislature last fall, and re-introduced again last week,” said BC Liberal Critic for Housing Todd Stone.

“Instead of adopting a flexible, common sense and widely supported solution, Housing Minister Selina Robinson has turned her back on local businesses and proposed legislation that doesn’t actually take action to address skyrocketing property taxes on unused airspace over the heads of small businesses.”

Today’s legislation provides limited exemptions to tenants of triple-net leases — meaning other small businesses could continue to be taxed on the unused airspace about their heads — instead of addressing the underlying problem of businesses paying taxes on airspace they do not use.

The bill proposed by MLA Stone would have given local governments the ability to create a new commercial property subclass — separating the existing value of buildings from the development potential of the site on which the building is currently located — and tax it at a mill rate the works best for their individual communities.

“Split assessment was what local governments, businesses, and organizations wanted”.

“Now, the Minister has proposed an approach which will require small businesses to lobby local governments for exemptions case by case. As opposed to this patchwork approach, my private members’ bill was widely supported by stakeholders, and it now seems apparent that Minister Robinson only opposed it because it was endorsed by the BC Liberals.”

“Now, she has wasted valuable time coming up with an alternative that gives less flexibility to local governments and is simply less effective. I urge the Minister to reconsider her legislation and implement a solution that will truly work for all stakeholders”, concluded Stone.