AARON GUNN -- Now in fairness, Justin Trudeau and Kathleen Wynne actually do have a lot in common 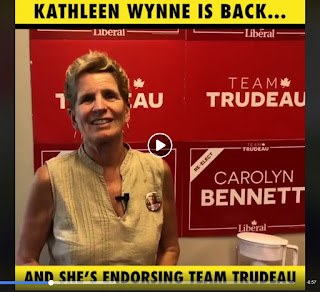 Guess who’s back in Ontario politics?

“Hey Carolyn (Carolyn Bennett, Liberal candidate for Toronto – St. Pauls).  I was just walking by, doing some errands and I could not walk by your office without saying ‘Hello’.  I love you and I just know you’re out there winning peoples hearts so good luck and we’ll see you on election night”

Yup, that’s Kathleen Wynne, the disastrous former Premier that hiked taxes, doubled hydro bills, and exploded the debt … and now she’s on the campaign trail for ‘Team Trudeau’ … which has to make you wonder how desperate Trudeau and his MP’s really are?

This is a person who led her party to the worst electoral in its’ history … a defeat so back that Ontario Liberals actually lost their official party status.

Now in fairness, Justin Trudeau and Kathleen Wynne actually do have a lot in common.

They both love carbon taxes … borrow endless amounts of money, and making ethically challenged decisions. Although in Wynne’s defense, she’s never dressed up in blackface, or actually been found guilty of an ethics violation.

Kathleen Wynne was bad, but Justin Trudeau is even worse.

ABOUT AARON GUNN:
Prior to his work for BC Proud, Aaron worked for the Canadian Taxpayers Federation (CTF) where he founded and became Executive Director of the Generation Screwed initiative, fighting back against government debt and its impact on future generations.

He is an advocate for taxpayers and common sense. Throughout his work and notably in his role as Spokesperson for BC Proud, Aaron has been a voice for citizens across British Columbia and Canada