“As poor countries get richer and they spend more on education their test scores rise, but as rich countries get richer, their scores remain relatively stable, which means spending more money on education in Canada will likely have little effect on test scores,” said John Krieg, professor of economics at Western Washington University and author of International Student Assessment: Performance and Spending. 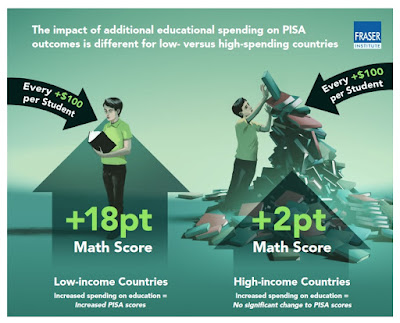 The study compares results from the Programme for International Student Assessment (PISA), an international series of tests commonly used to measure academic performance, from 72 countries from 2000 to 2015, the latest year of available data. At the same time, the study also compares national income (a country’s total income) and education spending levels (per person).

“Before policymakers in countries such as Canada spend more taxpayer money on education, they should first understand the likely effects of that increased spending and whether or not the money could be better used elsewhere,” Krieg said.

The Fraser Institute is an independent Canadian public policy research and educational organization with offices in Vancouver, Calgary, Toronto, and Montreal and ties to a global network of think-tanks in 87 countries.

Its mission is to improve the quality of life for Canadians, their families and future generations by studying, measuring and broadly communicating the effects of government policies, entrepreneurship and choice on their well-being.

To protect the Institute’s independence, it does not accept grants from governments or contracts for research.