OLSEN -- you are likely to hear confusing messages about “free, prior and informed consent” being a “veto” handed to Indigenous people; I hope to inoculate you from this virus 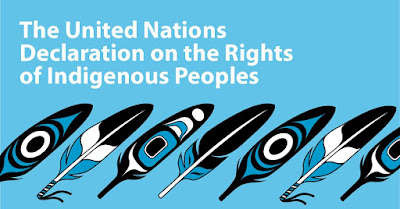 As we mark the 12th anniversary of the signing of the United Nations Declaration on the Rights of Indigenous Peoples (UNDRIP), we hear from Premier John Horgan that government will be introducing legislation this fall that formalizes the transformation of relationships with Indigenous people in British Columbia. A lot of credit needs to go to Minister of Indigenous Relations and Reconciliation, Hon. Scott Fraser and his team, for keeping this process moving.

This may sound like a big scary notion. The courts have ruled time and time again on Indigenous rights and yet governments have continued to ignore the court rulings and refused to change. This has created an environment of uncertainty, tension and conflict. No one is satisfied and a new path forward is necessary.

Furthermore, the status quo approach is simply not good enough.

Indigenous people and communities continue to be marginalized, their rights are the same as they have always been and, until the upcoming fall session, the province’s approach has been to either outright ignore those rights or force Indigenous people and communities to fight and prove they exist. The result is a great deal of uncertainty created by lawsuits, stranded assets and wasted time and money.

Supporting the UNDRIP
The idea that we simply agree with the UNDRIP, and that we should follow it, has been met with fear-mongering. I would like to reiterate my support for the process to develop the 40+ articles which outline the most basic expectations of how we would wish to be treated and we should be treating each other.

The process and work that created the UNDRIP is a positive example of deliberative democracy, inclusive of Indigenous perspectives, and it was decades in the making with broad international acceptance.

This fall you are likely to hear confusing messages about “free, prior and informed consent” being a “veto” handed to Indigenous people. I hope to inoculate you from this virus.

Adopting the UNDRIP as a piece of legislation extends no new rights. All the rights that are considered in this document already exist. They are rights our government has wrongly denied Indigenous people. As the Premier is clear in his statement they are “inherent rights.”

Canadian judges have been ruling on issues relating to “consent” since Indigenous people were finally allowed to secure a lawyer to defend themselves in the 1950’s.

Free, prior and informed consent
It’s been a slow-moving process. In our modern society, on a variety of fronts, we have been clarifying our expectations on consensual relationships and interactions.

To be clear, “free, prior and informed consent” is NOT a “veto.”

It’s a process that is inclusive of Indigenous people from the very beginning. All the outcomes (yes, no, maybe) are available, but it is a consensual and collaborative process.

We get there together.

A veto would be giving the power to a specific group stop an initiative once the process is complete and a decision is made.

These are important distinctions. For those who benefit from the status quo they may wish to keep things as they are, but with respect to the broad public interest it is important that we embrace the change. There is no doubt that the work ahead is going to be challenging and there are many obstacles that we must overcome. We must do so with kindness, compassion and love.

I believe we will be much more powerful when we recognize the complexity we have inherited. A lot has been done that needs to be undone and I’m thrilled that we are the first province in Canada with the courage to accept the challenge!