The evidence showed there were many ways in which Justin Trudeau, either directly or through the actions of those under his direction, sought to influence the Attorney General


Most of today’s commentary focuses on exerts from two separate investigations into Justin Trudeau’s actions, by the Office of the Conflict of Interest and Ethics Commissioner.  Not a whole lot needs to be said by me, the reports speak for themselves. 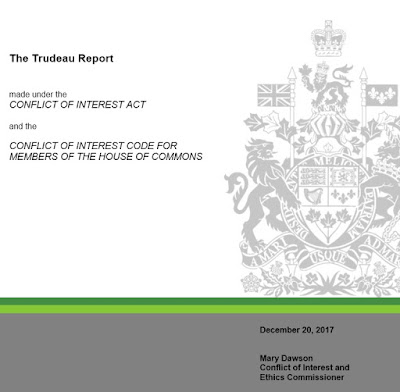 I found that Mr. Trudeau failed to meet the general duty set out in section 5 when he and his family vacationed on the Aga Khan’s private island.

Section 11 Subsection 11(1) prohibits a public office holder or a member of his or her family from accepting any gift or other advantage that might reasonably be seen to have been given to influence the public office holder in the exercise of an official power, duty or function.

Paragraph 11(2)(b) provides an exception from this prohibition where the gift or advantage is given by a relative or friend, but I found that the personal relationship between Mr. Trudeau and the Aga Khan did not fit within the concept of friend as contemplated by paragraph 11(2)(b).

I found that these gifts could reasonably be seen to have been given to influence Mr. Trudeau in the exercise of an official power, duty or function and, therefore, that Mr. Trudeau contravened subsection 11(1) when he and members of his family accepted the Aga Khan’s gift of hospitality and the use of his private island.

Section 12 prohibits ministers and members of their families from accepting travel on non-commercial chartered or private aircraft unless certain exceptions apply, namely travel required as part of the minister’s official duties, in exceptional circumstances or with the prior approval of the Commissioner.

I found that Mr. Trudeau contravened section 12 when he and his family accepted travel provided by the Aga Khan on private aircraft. The travel was not required as part of his official duties, the circumstances were not exceptional and he did not seek the prior approval of the Commissioner.

Section 21 requires that public office holders recuse themselves from any discussion, decision, debate or vote on any matter in respect of which they would be in a conflict of interest.

I found that Mr. Trudeau contravened section 21 when he failed to recuse himself from two discussions during which he had an opportunity to improperly further the private interests of the Global Centre for Pluralism. Shortly before, Mr. Trudeau’s family had vacationed on the Aga Khan’s private island. 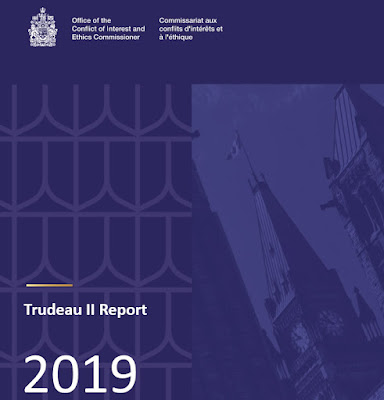 This report presents the findings of my (Mario Dion) examination under the Conflict of Interest Act (Act) of the conduct of the Right Honourable Justin Trudeau, Prime Minister of Canada. I sought to determine whether he used his position to seek to influence a decision of the Attorney General of Canada, the Honourable Jody Wilson-Raybould, relating to a criminal prosecution involving SNC-Lavalin, contrary to section 9 of the Act.

The first step in my analysis was to determine whether Mr. Trudeau sought to influence the decision of the Attorney General as to whether she should intervene in a criminal prosecution involving SNC-Lavalin following the decision of the Director of Public Prosecutions. The evidence showed there were many ways in which Mr. Trudeau, either directly or through the actions of those under his direction, sought to influence the Attorney General.

The second step of the analysis was to determine whether Mr. Trudeau, through his actions and those of his staff, sought to improperly further the interests of SNC-Lavalin.

The evidence showed that SNC-Lavalin had significant financial interests in deferring prosecution. These interests would likely have been furthered had Mr. Trudeau successfully influenced the Attorney General to intervene in the Director of Public Prosecutions' decision. The actions that sought to further these interests were improper since they were contrary to the Shawcross doctrine and the principles of prosecutorial independence and the rule of law.

Mr. Trudeau testified that layoffs have the potential to affect an election as there is a delicate intersection between policy and politics, and that if there are more layoffs than jobs created, it would have real consequences on a government’s ability to serve.

Conclusion
I find that Mr. Trudeau used his position of authority over Ms. Wilson-Raybould to seek to influence her decision on whether she should overrule the Director of Public Prosecutions' decision not to invite SNC-Lavalin to enter into negotiations towards a remediation agreement.

Because SNC‑Lavalin overwhelmingly stood to benefit from Ms. Wilson-Raybould's intervention, I have no doubt that the result of Mr. Trudeau's influence would have furthered SNC-Lavalin's interests. The actions that sought to further these interests were improper since the actions were contrary to the constitutional principles of prosecutorial independence and the rule of law.

For these reasons, I find that Mr. Trudeau contravened section 9 of the Act.

NOW we should also note that:

... on day one of the election campaign the Globe and Mail reported that the Federal Government had blocked the RCMP from fully investigating the SNC-Lavalin case.

... Brian Lilley from the Toronto Sun also wrote that ... this isn’t a matter of speculation or partisan spin ... isn’t people inventing a scandal where there is none. We know the RCMP have been looking into the matter because they have been interviewing people involved in the case and seeking documents. And the government has blocked them from doing so

... The Tyee (not exactly a bastion of right-wing reporting) stated on August 21st that ... there is enough evidence available to the public, thanks to Dion’s report, that giving Trudeau a pass on a criminal investigation will leave Canadians facing disturbing questions. If the decision is taken not to investigate, will it be based on what Trudeau actually did, or the office he holds? And are some people more equal before the law than others?

... and then we have The Star who today referred to last months Trudeau 2 Conflict of Interest Report and stated that ... much of what transpired is covered by cabinet confidence, meant to keep private the discussions of cabinet ministers and senior officials ... the Liberal government provided a narrow waiver to allow Wilson-Raybould to testify though she said she was still limited in what she could say. In his (Trudeau 2) report (Ethics Commissioner) Dion noted that the government’s refusal to fully waive cabinet confidences had stymied his own investigation.

What we also have is the leader of the Liberal Party of Canada who the Ethics Commissioner has stated ... stymied his investigations into the SNC-Lavalin Affair.

Justin Trudeau and family taking a vacation at some rich tycoons’ palatial resort is one thing ... however breaking conflict of interest rules by exerting his influence, and the influence of his office, to try and force Jody Wilson-Raybould to bend to his will is beyond what Canadians should be expected to tolerate.

For some reason unknown to most of us, Justin Trudeau truly seems to believe he is beyond reproach, and that the ends, justify the means. Did it come from living a life of privilege?  I doubt any of us will ever know.

This is not however, the type of person who should be leading our country ... not in my opinion anyway.