THOUGHTS AND COMMENTS from the floor of the UBCM Convention, on the provincial government, from Kamloops South Thompson MLA Todd Stone


To say Kamloops South Thompson MLA Todd Stone was not been impressed with recent announcements by Premier John Horgan’s NDP government, at the just ended Union of BC Municipalities convention, would be putting it mildly.

On yesterday final day, Stone applauded the Union of BC Municipalities (UBCM) for standing their ground and demanding proper consultation and respect from the provincial government.

“Mayors and councillors from across the province took a stand and clearly said that they are fed up with empty promises and NDP arrogance,” said Stone. “The resolutions passed at UBCM this week show that local governments want John Horgan and the NDP to stop ignoring the concerns of local communities. It is time for them to start listening to local governments.”

Commenting on concerns to UBCM representatives from communities around the province, MLA Stone indicated there were calls for John Horgan and the NDP to ensure that principles of mutual respect, consultation and cooperation be adhered to going forward.


Then he moved on to Wednesdays cavalcade of logging trucks which arrived in downtown Vancouver. 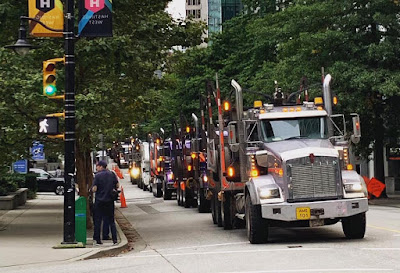 “Over 250 logging trucks came to UBCM in a passionate attempt by those hurt by NDP inaction on the forestry crisis to finally be heard by Premier Horgan,” stated  Stone. “Not listening has become a defining aspect of this NDP government. Whether it is overlooking local governments for caribou consultation, snubbing mayors requesting opt-outs from the Speculation Tax, or ignoring mayors and councillors over modular housing concerns, it is clear the NDP simply don’t listen to voices on the ground.”

Then he continued ... “John Horgan had an opportunity to address the concerns raised by the Official Opposition and BC communities at UBCM, but offered nothing more than jokes and platitudes”.

“Despite the UBCM unanimously passing a motion asking the NDP to reinstate the $25-million Horgan raided from the Rural Dividend Fund, his speech ignored those pleas and doubled down on his decision to deprive those communities of important funds”.

It’s inexcusable that during a time of crisis for forestry-dependent communities, the NDP would pile on with the suspension of the Rural Dividend Fund. It’s also deceitful of John Horgan to roll out the $69 mill forest worker support program & leave out one key detail - that these are not new dollars but rather redirected dollars from the now suspended Rural Dividend Fund.

I’m hearing from many angry mayors here at the UBCM convention in Vancouver. According to locally elected officials, this clawback means that dollars are no longer available for child care in Lumby, water treatment in Williams Lake, and drone footage to remap the Thompson Nicola Regional District (TNRD) post wildfire to boost tourism and film sectors

And these are just a few examples of community impacts due to this clawback.

“John Horgan and the NDP came to power on promises of making life more affordable. After two years, we’ve seen little action from this government that effectively combats the affordability crisis,” added Stone.

“John Horgan’s speech was little more than a stand-up comedy routine with buzzwords and niceties mixed in and no substance or concrete action on the issues facing our local communities,” concluded Stone.