Over the past several months, I’ve been clear about my concerns with the continued logging of high productivity old-growth. This past Spring, the BC Green Caucus called for a moratorium on logging old-growth hot-spots on Vancouver Island as an initial step.

I think it is important to clarify, though, that there is some old-growth that I fully support harvesting. Much of it is hiding in plain sight in the fully-developed urban landscapes of Metro Vancouver and Greater Victoria. 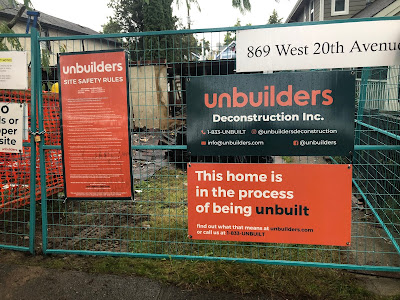 I am talking about the beautifully preserved old-growth found in many homes built before the 1970’s.   Each year however, more than 1000 such homes are demolished in these communities.

While the City of Vancouver has begun to implement regulations requiring a modest amount of recycling, a vast majority of the material from these homes end up in the landfill. That’s right, not only are we clear-cutting old-growth at unsustainable rates, we are also allowing beautiful old-growth lumber to be demolished and either thrown in a landfill or ground up and used as fuel in an industrial plant.

Though I probably don’t need to clarify this point, this is incredibly wasteful and completely unnecessary. It’s actually unconscionable.

While visiting Vancouver recently, Adam Corneil of the Unbuilders gave me a tour of one of his job sites and highlighted another option that not only is good for the environment but also has social and economic benefits.

Rather than demolishing these homes, Corneil and his team of tradespeople deconstruct houses, layer-by-layer, offering tremendous triple-bottom-line advantages for the property-owner and local governments.

As our landfills near capacity, we must aggressively divert material, especially if it’s not trash!

One quick look at the stack of rough-sawn fir milled from giants several hundred years old confirms they are far from trash.

Deconstruction is the right thing to do!

Once re-harvested, the wood is donated to Habitat for Humanity which then gives the property owner a tax receipt that offsets the cost of the deconstruction. Habitat for Humanity then sells the lumber and uses the revenue to build affordable housing. It’s a beautiful thing! With the federal and provincial tax credits in hand, property-owners not only take pride in their contribution to a wonderful cause but they are also rewarded financially.

It was difficult to stand on the partially deconstructed home in central Vancouver and not think about all the houses that have been landfilled -- and to think that not even 10% of the homes scheduled to be replaced this year will be deconstructed and diverted. 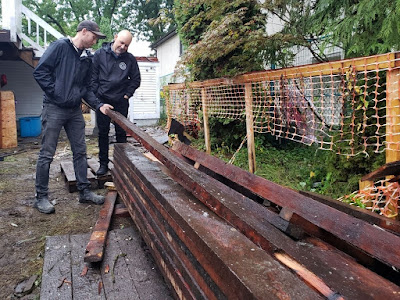 We are still dumping them into landfills at astonishing rates.

As regional governments look to find ways to preserve precious space in their landfills, diverting this material seems like one obvious solution. I believe we need more strict regulations on demolitions and deconstructions. Furthermore, there is likely more that the provincial and federal governments can do to support local governments with appropriate incentives.

There is a tonne of opportunity, and so I am thankful Corneil and his team are investing in exploring the potential.  Now, I hope that all levels of government will step in to ensure we are not needlessly wasting valuable old-growth lumber and filling landfills because.

As it stands right now, that’s exactly what we are doing.