On this day, when so many people tragically died, Justin Trudeau is asking us to remember them ... all the while blotting that out by changing the focus to his re-election bid


TODAY Prime Minister Justin Trudeau announced the beginning of an election campaign to elect members of parliament who will represent us in the 43rd Parliament.

Personally, I do not believe that he, nor his government, should be re-elected -- for some incomprehensible reason, he has made multiple mistakes, he has come under scrutiny for ethics violations, and for reasons totally confusing to me, he seems unable to understand that things are not always about him.

Take the date the election has been called – 9 / 11. On this very day he also sent out a statement declaring, in part:

Today, on the 18th anniversary of this tragedy, we remember the nearly 3,000 victims of the attacks, which included 24 Canadians. We offer our condolences to those who continue to grieve their lost loved ones.

We also pay tribute to the courage, perseverance, and sacrifice of the brave first responders, including the hundreds who lost their lives. Surrounded by destruction and debris, firefighters, police officers, military personnel, and ordinary people raced up the steps of the collapsing towers to rescue survivors, and fought for days to extinguish flames at the Pentagon.

On behalf of the Government of Canada, I encourage Canadians to honour those who lost their lives, and all those who selflessly offered their help to others on 9/11

On this day, when so many people tragically died, he asks us to remember them, all the while blotting that out by changing the focus to his re-election bid. 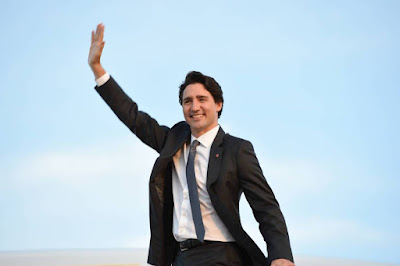 That’s where the focus of today will be directed instead ... and that was deliberate.

No there’s nothing selfless about that Mr. Trudeau, and to me, just ONE reason why you do not deserve to be re-elected ... however that will be for the people of Canada to decide over the next six weeks.

Just eight days ago I wrote a commentary entitled, “In the words of Justin Trudeau...”

If you want any more reason for his government not to be returned on October 21st, I invite you to re-read, or perhaps read for the first time, this commentary.

“...Canadians have an important choice to make”, Trudeau stated this morning.  He then went on to say, "We've done a lot together these past four years, but the truth is, we're just getting started”.

As you reflect over the past four years of Justin Trudeau's Liberal government, I encourage consider his words  Telling me that he’s ‘just getting started’ does not bring confidence to me, nor should it, I hope, to the majority of Canadians when they cast their ballot on election day.