Day one of the campaign to elect the next parliament of Canada is well underway, and nearing a close over on the east coast of Canada.  Here at home I spoke with incumbent Conservative MP Cathy McLeod, earlier today, about what she hopes to achieve, and her time in Ottawa since first being elected.

McLeod was first elected to the House of Commons in October 2008, and subsequently re-elected in 2011 and 2015.  Prior to that however, Cathy served the public in her capacity as a registered nurse for a number of years.

Her dedication to healthcare continued when she managed a number of health care centers, including Pemberton, Logan Lake, Chase and the Kamloops Downtown Health Centre, as well as working for Interior Health in a leadership role focused on primary health care reform.

I asked specifically how that kind of experience translates into the position of being a Member of Parliament. 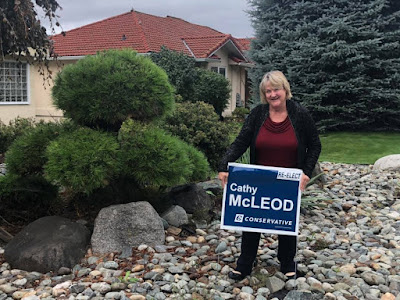 “Primary healthcare, and health care in general, have been near and dear to my heart”, she told me.

“What I’ve found is when you move in to federal politics you have the opportunity to bring that kind of background into many components of your job”.

“For example,” she went on to say, “When I was parliamentary secretary to the Minister of Labour we were looking at mental health in the workplace.  I think sometimes you can match the roles and the responsibilities you’ve been given in Ottawa, with the backgrounds and passion”.

The issue of resource extraction and forestry … especially in the Interior of BC … and particularly in the Kamloops – Thompson – and Cariboo … is something of crucial importance to residents, whether rural or in the cities. I asked Ms. McLeod how important she felt they would be during the election.

“I think in particular for this area, there have concerns expressed around the natural resource sector, whether it be the Trans Mountain Pipeline, or the forestry crisis are top of mind for many”.

“We have the NDP and Green of course who are dead set against it, and the Liberals I think they can go with one and done … or perhaps it’s more like maybe None and Done”, said McLeod. “They overpaid for a pipeline which is now a government asset.  Because of their regulations, and their legislation, they’ve essentially driven away almost every opportunity for a pipeline.  From my perspective, it should, and might, play an important role locally, but we’ll have to see”.

What else then is she hearing about, on the doorstep, I asked?

“I’m certainly hearing the issue about affordability.  For mom’s and families with young children they’ve been talking about the challenges of the cost of daycare, the cost of kid’s sports.  But it’s all the age ranges who are expressing issues around affordability”.

“We recognize the life is becoming very challenging and unaffordable for many, and so I think a lot of our policies and commitments are going to be reflecting that reality”.

Serving the public, resolving individual needs, looking at the big picture across the country, and right in her own backyard. These are all things that are a part, large and small, in the role of a Member of Parliament.  I asked Cathy is there one thing you are most proud of being able to do since first being elected, and she was quick to respond.

There are many many things that I’m proud of for each year I’ve been there … but when I worked in Chase at the Health Care Centre, there were a number of times where I was called in to help in the emergency department because of severe accidents at Hoffman’s Bluff”

“An early priority was the twinning of the highway, and of course that was a federal / provincial partnership.  I think if you look at that section of highway between Kamloops and Hoffman’s Bluff, to me, it’s one of those things that I was so glad I was able to push for.  At the time as government, it was a priority and it was a safety priority”.

“But obviously each and every year I can have different things I’m certainly very proud of”, she concluded on that question.

I asked Cathy one final question, and I’m sure it wasn’t unexpected, nor will it be the last time it is asked.  I asked about government ethics and accountability.

“On the day of the campaign that’s being kicked off”, she said, “we know from the Ethics Commissioner’s Report that the Prime Minister was guilty of a violation of the Conflict of Interest Act”.

“We heard that there are still many people that feel their story needs to be told so that we know exactly what happened … and apparently as part of the RCMP investigation, they are being precluded from getting the information that they need to decide whether they can move forward or not.”

“This is a government that promised to be transparent and accountable … they came in 2015 talking about sunshine and I would suggest it’s been anything but”, she concluded.

AUTHOR’S NOTE … full disclosure is required as I am a member of the Conservative Party of Canada, I intend to vote for her, and have registered with the local campaign to volunteer as needed ~~ Alan Forseth