ADAM OLSEN - There is a social and economic cost to automation


I was standing at the self check-out at the grocery store the other day thinking about an article I read a couple of years back. 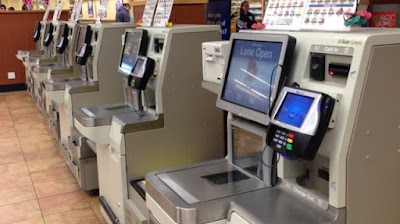 It featured a short video and transcript of Bill Gates making the case for taxing the robots.

I noticed four check-out stations staffed by a single employee. On a busy afternoon in the past, those four stations would need at least four dedicated people and up to four more people diverted from the produce or grocery departments to bag the items, to operate.

Automation has impacted up to (or at least) three jobs at that grocery store and the market is trending toward losing more jobs, as I highlighted in a blog post earlier this summer.

As an aside, with nearly 600 posts published on a variety of topics they are all beginning to blur together. I got to that last paragraph and thought, hold on, I’ve already written about this.

Anyhow, back at it.

Gates makes an important contribution to the discussion, not only as the disruptor investing in artificial intelligence and automation but also in offering a potential solution. As I point out at the very end of my previous post, disruption to the workforce will impact the revenue collected by income tax and more people will be competing for fewer of those traditionally available jobs.

Some of those displaced people will be employed by new, yet-to-be created industries as happened during the mechanization process of the industrial revolution. Others will need to transition to other work and so it will ripple through the marketplace.

The robots: From mechanization to automation

There is a social and economic cost to automation and, as I have heard time and again by folks in a variety of fields, there is a shortage of workers in many jobs that serve our seniors and youth. In many instances, these industries feature incredibly low wages.

As Gates points out, taxing the robots is a way to generate the revenue to increase re-training opportunities and wages for student support staff, early childhood educators and home care workers serving our elders, just to name a few.

It is interesting that Gates does not expect business to solve the issues they are creating by automating. Instead, he says, “the inequity-solving part, absolutely governments got a big role to play there.”

Gates raised this point more than two years ago.

The sooner the provincial government takes control of their responsibility to the public interest, and heeds his advice addressing the situation, the better. It will help businesses make informed decisions about if, how and when they will automate certain jobs ... and it has the potential to generate revenue to improve services balancing the growing inequality in our economy and society.