During the last forestry crisis, we worked with the federal government putting a package together – including true bridging to retirement, unlike the company dependent NDP plan 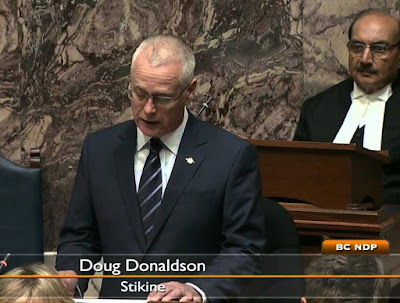 Forestry workers wishing to continue working in the industry can take little comfort in Tuesday’s announcement by John Horgan and the NDP, who remain absent on this file with no plan to help the industry succeed through this crisis.

That announcement from the government indicated that they would create a $69 million to fund a new series of measures aimed at supporting British Columbia forest workers impacted by mill closures and shift reductions in several BC Interior communities.

Forestry Minister Doug Donaldson also called on the forest industry to increase supports for impacted workers, ensure key corporate leaders are working on the industry transition and ensure that it does a better job of communicating effectively with affected workers and communities.

“The vast majority of people in forest-dependent communities want and need to work, but there was nothing announced Tuesday to help the industry return to a healthy and competitive position,” stated BC Liberal Forestry Critic and Nechako Lakes MLA John Rustad in response to those comments.

“Clearly, the NDP does not see its own role in the crisis by making BC the least competitive jurisdiction in North America to do business. High taxes and a refusal to make stumpage fees more consistent with current market values is pricing BC out of reach”, Rustad continued.

When I asked him about those stumpage fees, he indicated that under the NDP, stumpage revenue had more than double over the past 2 years.

“The spike in lumber prices had a big role in this increase, however, BC’s stumpage system is very slow to respond to changes”.

Our province updates stumpage annually on July 1st, as well as with 3 minor quarterly updates. Meantime next door in the province of Alberta, they update stumpage monthly.

“We could very easily do the same thing and have our stumpage rates better reflect current market conditions. Log costs are one of the largest factors in all of the curtailments we have seen in BC, and there have been a couple of permanent closures due to the shortage of log supply”, remarked Rustad.

One of the concerns according to the Liberals, is the need to establish a forestry competitiveness committee, including opposition MLAs, focused on how we can ensure a healthy sector in the short and long-term.  It appears however said the Liberals, that John Horgan and the NDP would rather focus on early retirement and getting people out of the forestry sector than taking meaningful action to help them succeed today.

Again, in discussing the issue and problem with John Rustad I asked about the Liberal plan ... specifically if this could or would include the people working in BC’s forestry communities, and other locals, and even former long-time forestry workers that are perhaps now retired?

Rustad responded by indicating the former government had a committee in place, but that the NDP got rid of it when they formed government.

He went further to state that, “This committee should have industry, contractors and workers at the table looking at every aspect of forestry to find savings. Adding MLAs makes sense as they need to be part of the solution”.

“It appears the NDP is throwing in the towel and conceding that B.C. has too many mills and the industry needs to be downsized. I know for a fact that there are plenty of people in communities like Mackenzie who would rather have long-term job stability rather than simply being shown the exit”.

“(The governments’) announcement does nothing to drive down costs to help existing producers stay competitive and keep workers working.”

What about supports for communities and impacted workers, including employment assistance for those workers who don’t currently qualify, I asked John?  Going further, I questioned if there should be engagement, at a round-table, with those directly impacted in British Columbia’s small towns and rural communities ... and that this should undoubtedly include forestry families, local government, First Nations, and local resource management professionals) to seek their input.

“During the last crisis in the forest industry, we immediately worked with the federal government and put together a package. This included a true bridging to retirement (not like the NDP’s which is dependent on companies participating), job sharing programs including having forestry employees working two or three days a week, and then collecting Employment Insurance (EI) on the other days”, said Rustad.

He continued, “It also included extensions to EI since the downturn lasted more than allowable benefits.  Further, there was a funding package directly to communities most impacted so they could hire key trades people to do community projects and keep them employed and in the community for when the forest sector recovered”.

As for relief from softwood lumber tariffs, which the US government imposed on our province, Rustad was critical, indicating that the province is not engaging with the Americans, and that they seemed content to just sit back and watch the litigation.

“For example,” he began.  “Last spring Canada sent a delegation to meet with U.S. governors, and others, to build support for a solution. This delegation was led by the premier of New Brunswick. BC did NOT participate even though we account for fifty percent of Canada’s softwood exports to the USA”.

Job losses will continue, and communities will suffer more, unless this NDP government comes up with a plan to make our forest industry competitive once again, the Liberals declared.