ADAM OLSEN -- Many British Columbians are ready to do their part, and they want the provincial government to embrace the optimism of Boyd and Naam


The growing public discourse about climate change is having a dramatic impact on people. We are beginning to hear more and more about increasing eco-anxiety.

The concern is not unfounded; however, paralysis from an overwhelming sense of dread is not helpful and so we must find a healthy balance between informing people of the emergent challenges of human-induced climate change and freezing them in fear, thus immobilizing them from the action we all need to take to mitigate further damage and adapt to the changes that have already happened or are happening.

This is precisely why people like environmental lawyer Dr. David Boyd*, a University of British Columbia professor, the UN Special Rapporteur on Human Rights and the Environment and author of The Optimistic Environmentalist (and many other important works,) are so important.

Remaining optimistic
I heard another positive voice on Sean Carroll’s Mindscape podcast. His name is Ramez Naam**. Naam is an author of the science fiction Nexus trilogy, software developer and the Chair of Energy and Environmental Systems at Singularity University.

A great deal of the conversation between Carroll and Naam focussed on the energy production, storage and transmission revolution that is currently underway. They discuss the free-falling cost of renewable energy that is driving the economic case for building new renewable infrastructure and how, in some cases, it is cheaper to build new renewable energy than to maintain the aging fossil fuel sources.

Flipping the negative to a positive is critical if we are going to move on climate mitigation and adaptation opportunities. As we see in many instances, the economic formula is already driving different decisions in jurisdictions around the world. In other cases, we need public policy to set the new direction. This is very much the case for the initial change to renewables a few decades back.

There are too many examples though where British Columbia and Canada are entirely beholden to the fossil fuel incumbent corporations that have owned the political narrative for the past century. They have expended tremendous resources to armour their investment and status, promoting that they are the only option for the “jobs and economy” storyline peddled by the political class.

Stopping fossil fuel subsidies
As such, while the world needs a dramatic shift toward renewable energy and products produced using energy from renewable sources, the Liberal Party of Canada, and the BC NDP, continue to subsidize the fossil fuel dinosaurs.

Rather than developing public policy that rewards industry for purchasing steel produced by companies who are innovating, our governments are handing out massive tax payer funded corporate welfare subsidies and forgiving tariffs and duties on foreign steel and aluminium for projects like LNG Canada.

So, not only are we investing in new climate-killing fossil fuel infrastructure, but we are not even capturing all the benefits of the “jobs and economy” narrative that nourishes so many back room political operatives. Put it this way, we are allowing LNG Canada to manufacture components of their facility off-shore using cheap and dirty foreign steel and aluminium, and ship them here for assembly. What about all that “good-paying, family-supporting jobs” rhetoric that these governments have been deceptively trading in for years?

Letting go!
In addition to this mess, there are people in my riding such as Boyd, who was part of a solar project on the Pender Island school, and the Salish Sea Renewable Energy Coop on Galiano (and beyond), who want to be part of the renewable energy revolution, and whose efforts to strengthen their local energy grid and grow their solar program, are being actively blocked by BC Hydro and the BC NDP government. 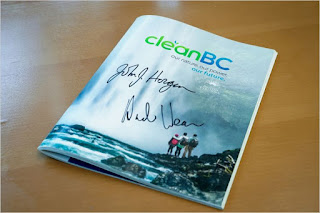 Let’s celebrate Clean BC. It is certainly an important step forward, although, there is still so much more we can do.

Many British Columbians are ready to do their part and they want the provincial government to embrace the optimism of Boyd and Naam. We can do so much more in being leaders on climate action rather than laggards who speak out of both sides of our mouths.