According to the BC Liberals, Premier John Horgan has been sitting on hundreds of millions of dollars originally promised to support businesses manage their response to the pandemic 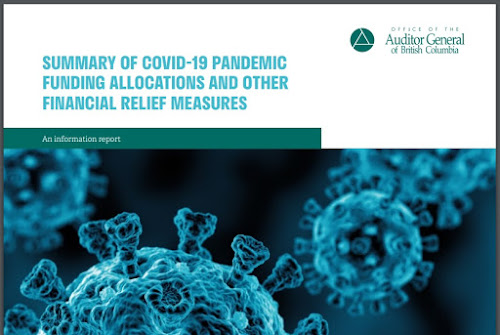 Pickup’s report is a summary of funds announced by the government as part of its response to the pandemic.

It includes funding allocations under the $5-billion Pandemic Contingencies allocation ... BC’s contribution under a federal cost-sharing agreement ... and other significant relief measures. The report indicates it is a “snapshot of known financial information as of August 18, 2020”, and was not audited by the Auditor General’s office.

A detailed summary of the $5-billion Pandemic Contingencies allocation shows that $3.5 billion has been reserved for individuals and households, critical services, and business and industry. Of this money, the office was able to identify allocations totalling around $2.6 billion. This were in the following three categories:

There is also just under $900 million dollars that the Auditor General has not yet been able to identify.

Of the monies allocated for business however, the BC Liberals are claiming that the NDP government of BC Premier John Horgan ... has been sitting on hundreds of millions of dollars that was originally promised to support businesses manage their response to the pandemic.

In a media release early this afternoon from Jas Johal, the BC Liberals critic for Economic Development indicates that ... the Auditor General’s report shows that when the $5 billion COVID fund was announced, the NDP specified $2.8 billion was allocated for individuals with the remaining $2.2 billion allocated for businesses.

Additionally, the Pickup’s report states ... the remaining $1.5 billion has been set aside for economic recovery, but this money has not yet been allocated.

The Province also approved a $1 billion allocation to participate in a cost-sharing agreement with the federal government as part of the Safe Restart Agreement. These funds will be put toward the recovery needs of local governments and public transit services.

In addition to the $5-billion and $1-billion funding allocations, the government has announced other financial relief measures.

Auditor General Michael Pickup also identified approximately $1.6 billion in other financial relief measures, as well as $6 billion in deferrals. Of this amount, there was:

Last week, according to the Liberals, the NDP added further insult to injury by abruptly ending deferrals on major BC taxes. Businesses will now have to pay a total of $6.3 billion in deferred taxes by the end of September ... with no option provided for payment instalments.

"For seven months, John Horgan has refused to deliver an economic recovery plan -- and now we find out the NDP has deliberately withheld money that could have helped stressed-out employers and employees. The big question is, why?

It certainly looks like Horgan and the NDP are building a slush fund to spend during a snap fall election and that's completely unacceptable," stated Johal.

He then concluded, "We supported the government in March because British Columbians deserved to be put first before politics. It's become obvious that Horgan is only looking out for himself. There's no other reason for the NDP to have not delivered the support they promised."