FELDSTED -- The denizens of the TOM (Toronto, Ottawa, Montreal) triangle will resist change, with the storm and thunder that huge financial assets and ownership of the media can muster


I do not usually repeat previous e-mails, but this time I will make an exception in view of the results of the election.

Canada has Left the Building

Avarice is an acid that ultimately destroys the avaricious. Greed overcomes common sense, logic and reason with fatal consequences. Canada as we knew her is collapsing under irresponsible political leadership that fails to understand the greatness it inherited.
Canada has always been considered a treasury of resources for men of means to exploit. The northern portion was colonized to exploit available resources, initially fish, furs and timber. Control over the colonies was initially in Paris (roughly 1608 to 1759), and then London from 1763 onward.

London agreed to the British North America Act, as it relieved London of an obligation to come to Canada’s aid if the USA invaded. It took anther 64 years before London relinquished full control over Canada in the Statute of Westminster 1931. Political power was then vested in Ottawa.

What has not changed since 1763 is the notion that founded the Company of One Hundred, the Hudson’s Bay Company and the North West Company; corporate friends of government should be allowed to harvest natural resources for a profit.

Over my lifetime, I have watched Winnipeg diminish from a railway hub, grain exchange hub, packing house giant and aircraft maintenance hub into a once-was.

It is all gone ... taken over by avaricious eastern investors.

Packing plants that dotted the western landscape have disappeared and we now export live cattle to the US for slaughter, and then import meat from the US for more processing here. The jobs in Canada have vanished along with the value-added GDP of processing our own produce. Our world-class rail maintenance facilities were allowed to crumble and moved east.

Our aircraft hubs in Edmonton (once gateway to the North) and Winnipeg have been moved to Quebec, which would hurt less if Bombardier was a successful enterprise and did not require constant federal support unavailable to western Canada.

Federal failure to manage our ocean fish stocks resulted in destruction of the Atlantic fishery. Tens of thousands of Atlantic families were left destitute with the option of starvation or relocation. There was a mass exodus from Atlantic Canada to the west, primarily to Alberta. Albertans, and Maritimers, discovered they had the same values; independence, industry, fairness, respect and responsibility.
Federal governments that allowed CNR and CPR to abandon spur lines, and sell of huge tracts of lands that had been given to those railroads to build transcendental rail lines, without compensation should be hung for treason. There is no valid reason why those spur lines should not carry grain, cattle and natural resources to market and deliver finished good to depots along the way.

We have effectively lost rail passenger service west of Toronto. Via Rail is a disaster except in the TOM triangle. Railroads that brought hundreds of thousands of settlers to Manitoba, Saskatchewan and Alberta -- when central Canada needed settlements to stave off potential incursions from the US -- can’t run a reliable passenger service today.  Why?

Our intercontinental highways and rail lines are a federal responsibility.

Rail and roads that connect Canada to inland ports or seaports are a federal responsibility.

The spur rail line connecting the transcontinental rail lines to Churchill is a federal responsibility and should be able to handle any sort of traffic destined for a seaport.

All highways connecting the Trans-Canada to US ports of entry are a federal responsibility and should be first-class divided all weather highways protected from flooding.

The Turning Point
The turning point came when our government allowed rapacious American investors to mount a pubic relation campaign to shut down our oil and gas industry. Not only did our government fail to protect Canada’s interests but joined in the effort, claiming without justification that our oil and gas sector was contributing to global warming.

Avarice has finally eaten up the federal government and its elitist friends. Trudeau has accomplished what no other Prime Minister in Canada has done. He forced us to look at Canada as she is; fresh out of the shower, unadorned by clothing or makeup and she is not pretty.

I have served Canada in various capacities as a proud patriot and have accepted the inherent risks without a second thought. I loved my Canada including Quebec. I have travelled from coast to coast and broken bread, drunk too much wine, and compared and debated all sorts of issues and ideas with people from every province. The lack of acrimony and the politeness and respect shown throughout is astonishing. It pains me to admit that that is the Canada I once knew and loved.

Our federal government, has abandoned everyone living east or north of Saguenay, Quebec ... and west of North Bay, Ontario. 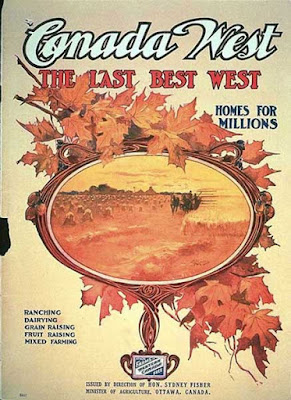 I am not going to waste time trying to reform a government system that is beyond rehabilitation. The denizens of TOM (Toronto, Ottawa, Montreal) will resist change with the storm and thunder that huge financial assets and ownership of the media can muster. To those who think differently, remember the oilsands campaign.

I am a prairie lad through and through. I know prairie people and what they are capable of. Most of our forefathers arrived here from all over the world with what they could carry after a long and arduous journey to a strange an unforgiving place.

They built crude shelters of sod, trees and whatever lumber they could afford to face blistering summer heat and unforgiving cold and wind in winter. They cleared forests and tilled some of the quarter section of land homesteaders were granted. Individually and collectively, they built, worked and prospered. They built churches, community halls, libraries, schools and hospitals.
When private enterprise failed to meet their needs or was too expensive, they created credit unions and cooperatives that provided banking, groceries, gasoline, grain elevators, hardware, insurance, lumber and other necessities. Profits went back to the member investors.

Provinces took over hospitals and health care, but in so doing lost thousands of hours of volunteer efforts in fundraising, construction, landscaping and community pride in having a superior facility.

I have no doubt that Alberta, Manitoba, Northwest Ontario and Saskatchewan can draw on their heritage and create a separate nation without the ethnic and economic rivalries that dominate TOM and central Canada. TOM can blunder on with a smaller domain and spend a decade designing a new motto.

The prospect of the Atlantic provinces joining us, effectively land-locking TOM is intriguing. Our current constitution, requiring us to sell our energy and other resources to central Canada at local rates less transportation costs would no longer apply.

Toronto, Ottawa, Montreal cannot survive without us. It would have to compete with the West for investments and negotiate rather than dictate terms of reciprocal services and purchase of resources.