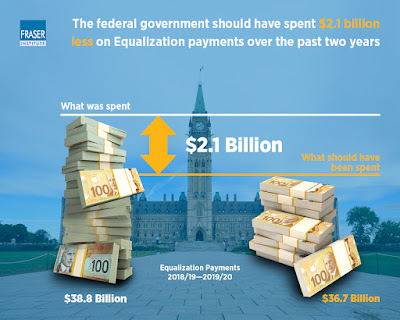 Canada’s equalization program has cost taxpayers — including taxpayers in “have” provinces such as Alberta — $2.1 billion more in equalization payments since 2017 due to a program design flaw, finds a new study released today by the Fraser Institute, an independent, non-partisan Canadian public policy think-tank.

“Most Canadians likely assume that if the fiscal disparity between richer and poorer provinces shrinks, equalization payments also shrink—but currently, that’s not how the program works,” said Ben Eisen, Fraser Institute senior fellow and co-author of Why is Equalization Still Growing?

Due to a specific rule (created in 2009) within Canada’s equalization program, which transfers federal tax dollars to lower-income provinces, total equalization payments to “have-not” provinces must grow every year, even if the gap between richer and poorer provinces shrinks.

And that’s exactly what’s happened recently, due largely to economic slumps in “have” provinces such as Alberta. The gap between richer and poorer has shrunk, yet program costs kept rising. As a result, total program costs over the past two years have been$2.1 billion (or 5.7 per cent) larger than they would have been without the rule.

So, what can be done to solve this problem?

Thankfully, there’s a relatively simple solution. Ottawa can replace the “fixed growth rate” rule, which requires the program’s envelope to grow annually, with a new rule that lets the cost of the program shrink if “richer” provinces such as Alberta continue to struggle.

“Federal equalization is already a controversial program, and unfortunately a key source of regional discontent, so Ottawa should ensure that when the economic gap between richer and poorer provinces shrinks, the equalization program should shrink, too,” said study co-author Steve Lafleur, a senior policy analyst at the Fraser Institute.

TO READ the full report, “Why is Equalization Still Growing”, CLICK HERE