Despite the protests and the cries of doom, there is no credible, objective evidence to indicate that average Canadians have been poorly served by their federal government.

Some people earning high levels of passive income are grousing but it’s hard for the average person to feel too sorry about the tax bill on the investment income of somebody with a seven-figure bank balance.  Even at that, the tax rate for passive income of this sort is relatively low by international standards in developed countries. 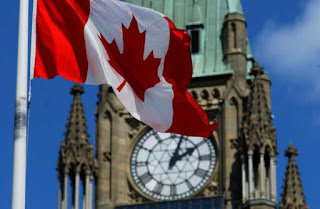 Unemployment?  At or near record lows.  BC’s unemployment rate dipped under 5% last month.  In this region we will have to address some of the issue related to the forest industry, but every economy will have some sectors in peaks and some sectors in valleys from time to time.

Federal Debt?   Relative to the size of our economy, Canada’s federal debt to GDP ratio of about 31% is the lowest in the G-7, lower than its 50 year average of 38% and it is declining.  Canada is the only G-7 nation with a declining federal debt to GDP.   Some may chime in about how our grandchildren will have to pay off this debt.  They will not……not anymore than we paid off Canada’s debt at the end of WWII (when it amounted to 118% of our GDP).   We just grew the economy faster than our debt.

But rather than throw a lot of number around, let’s look at the average Canadian.

According to those wild-eyed leftist radicals at Bloomberg in the Unites States, the average Canadian is the richest average anyone on the planet.  You heard that right.  No developed nation on Earth produces more purchasing power for its average citizen than Canada.   We passed the Americans around 2016 and the current figures show that up to the 56th percentile of income, Canada is number one.

Before you ask…..yes the figures given in this article are all in the same currency and AFTER tax.  In addition, the authors speculate that if our relatively affordable healthcare and social benefits like more affordable post-secondary education are factored in, the gap would become even wider.

I would be lying if I said I liked everything I was seeing from our federal government and its leader, Justin Trudeau.  However, if your litmus test for government success is how well the economy serves the average person, no government on the planet has done better than the Liberal Party of Canada.

Locally, I would rather see Terry Lake on the inside of that government than any other candidate running.  That is why Terry Lake has my vote.

John is a past chair of the Interior Health Authority. He has been recognized as a distinguished Alumnus of TRU, selected for a BC Community Achievement Award, designated as Queen’s Counsel, and received the Dean’s Award for Excellence in Teaching.