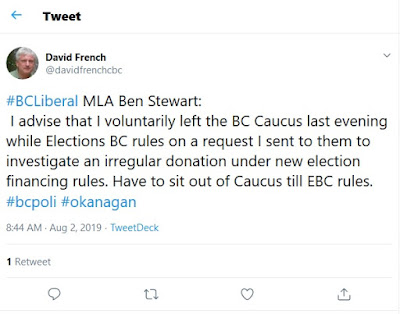 The review found that no provisions of the Election Act were violated.

MLA Stewart wrote Chief Electoral Officer Anton Boegman on August 1, 2019, to advise him of the issue. It involved a political contribution to the BC Liberal Party that was reimbursed to the contributor by the party.

The review found no evidence that the political contribution and reimbursement were made in contravention of the Election Act.

Elections BC now considers this matter closed. To protect the privacy of the individuals involved, Elections BC will not be making further comment on this issue.

However Stewart, the MLA for Kelowna West, stated:

“I’m looking forward to returning to the Legislature this fall with the rest of my BC Liberal colleagues and I thank Elections BC for their thorough and timely review of this issue.”

“Thank you as well to my constituents for their support and encouragement, I will continue to work hard to represent them in Victoria.”